“For gymnastics enthusiasts, Vaulting is a sister sport, but on the back of a horse. All Vaulting routines—team, individual, and freestyle—are performed on the back of a cantering horse, traveling in a circle and attached to a lunge line. Competitors are judged on their ability to smoothly execute compulsory movements demonstrating strength, flexibility, and balance during their routines. The horses are an important part of the team and, like the human gymnasts, are also judged on their performance. Vaulting at WEG features Men's, Women's, Pas de Deux and Team competitions.” - Fédération Equestre Internationale (FEI)

The U.S. Vaulting Team has won a total of nine medals at the FEI World Equestrian Games, including a Squad gold medal in 2010 (Lexington, Kentucky USA) and two Individual gold medals, one in 1998 (Rome Italy) and one in 2006 (Aachen, Germany). 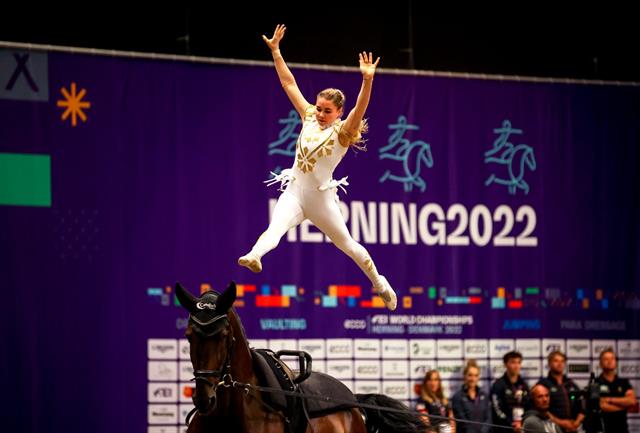 Herning, Denmark – The final day of the Mustang Corp. FEI World Vaulting Female Championship saw two U.S. combinations finish inside of the top ten, with Kimmy Palmer taking fifth overall, as the highest placed athlete for the team with an overall score of 8.415, and Tessa Divita taking ninth on a combined score of 8.122. Emily Rose finished in twenty fifth overall with a combined score of 7.423. Kimmy Palmer in her freestyle. ©US Equestrian Palmer (Half Moon Bay, Calif.) impressed...

Herning, Denmark – Kimberly “Kimmy” Palmer (Half Moon Bay, Calif.) topped the standings again for the U.S. Vaulting Team again today in the FEI Individual Female Technical Test, earning a personal best score of 8.329, to hold sixth place overall with a combined score of 8.129 heading into the final day of competition. Teammate Tessa Divita earned a 7.724., with an overall two-test score of 7.782, to hold tenth place, while Emily Rose (Santa Cruz, Calif.) received a 6.495, for... 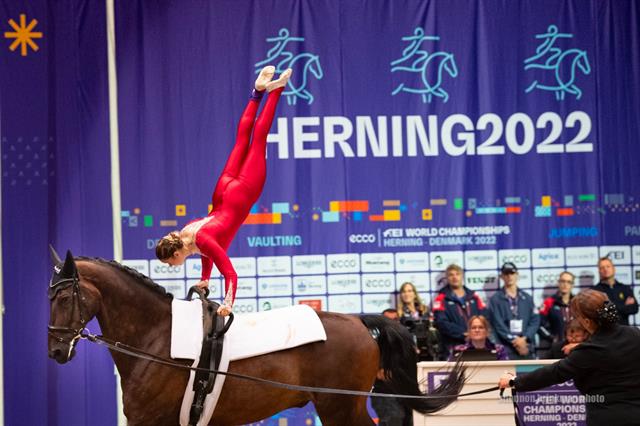 Herning, Denmark – The U.S. Vaulting Team took to Jyske Bank Boxen today to begin competition at the ECCO FEI World Championships Herning 2022, opening the day as the second team to present a squad for the Compulsory Tests. The team also saw all five individual combinations take to the arena as well, with Kimmy Palmer, finishing as the highest placed U.S. athlete at the conclusion of day one. Kimmy Palmer & Rosenstolz 99 ©ShannonBrinkmanPhotography In the Squad Compulsory, the... 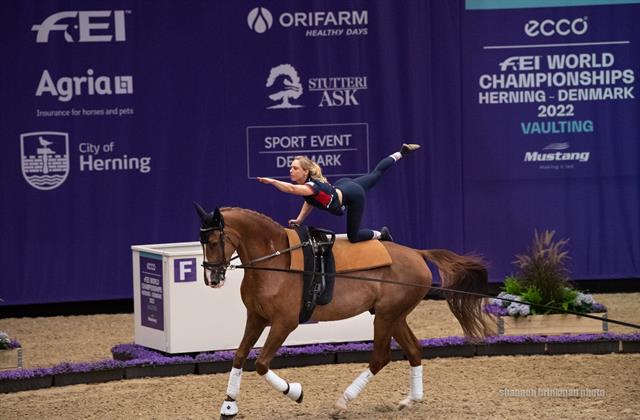 Herning, Denmark – The U.S. Vaulting Team will begin competition at the Mustang Corp. 2022 FEI World Vaulting Championships in Herning, Denmark, tomorrow, August 6, featuring Individual Male, Individual Female, and Squad Compulsory Tests. All eight horses presented at the First Horse Inspection today were passed by the ground jury and deemed fit to compete for the week of competition ahead. The U.S. Vaulting Team will feature three athletes competing in the Individual Female division, two... 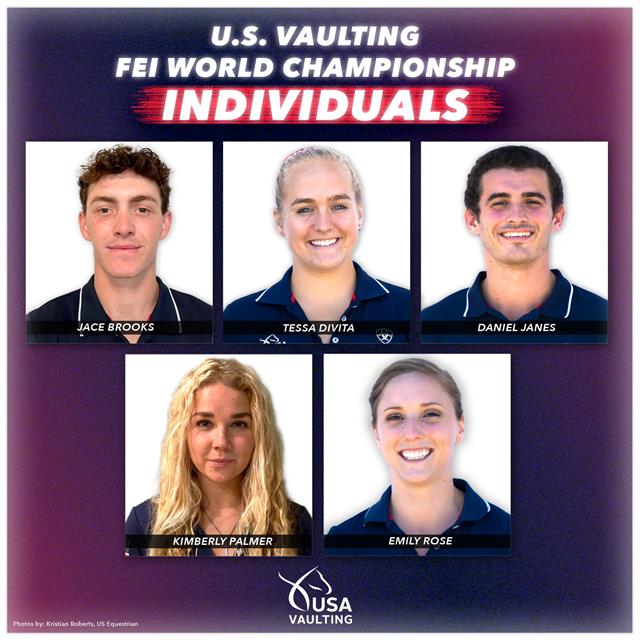 Lexington, Ky. – US Equestrian is pleased to announce the athletes who will represent the U.S. Vaulting Team in Individual, Pas de Deux, and Squad competition at the Mustang Corp. FEI World Vaulting Championship in Herning, Denmark, August 6-10, 2022. The team will be led by Chef d’Equipe Jennifer Arntsen and Team Leader Michelle McQueen. The following athletes have been selected to the U.S. Vaulting Team and are listed in alphabetical order: Individual Female Tessa Divita (Portola... 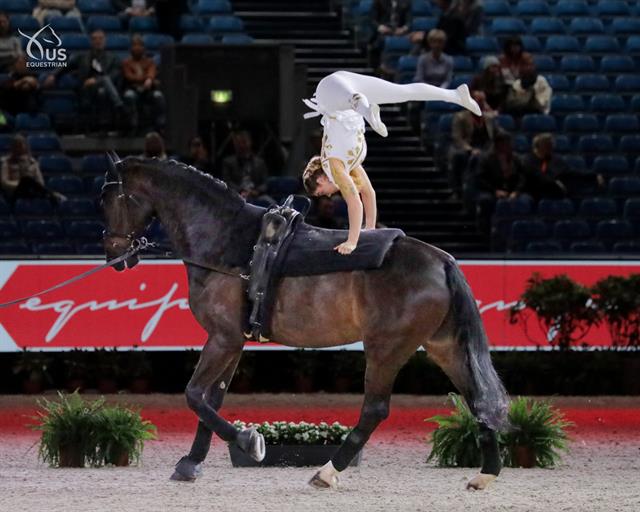 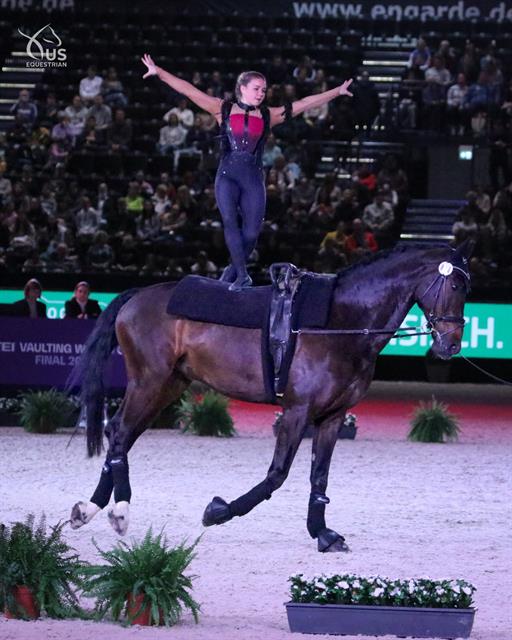 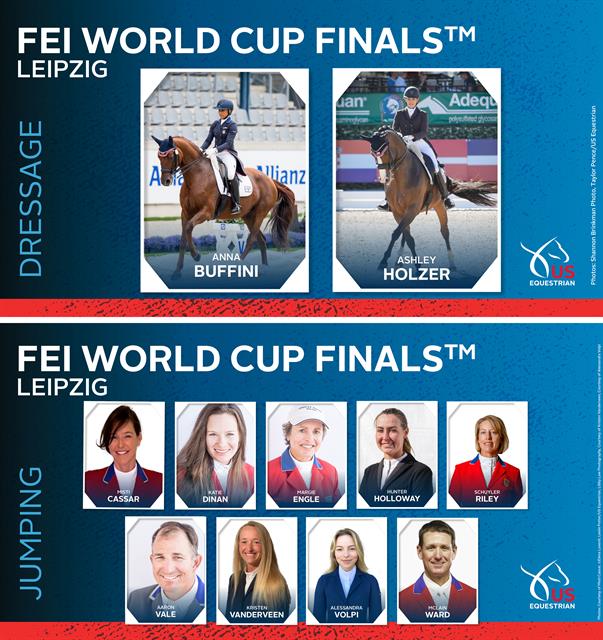 US Equestrian Announces Athletes for the 2022 FEI World Cup Finals™ for Dressage, Jumping, and Vaulting

Lexington, Ky. – US Equestrian is pleased to announce the athletes who will represent the U.S. in dressage, jumping, and vaulting at the 2022 FEI World Cup Finals. The Finals will be held in Leipzig, Germany, April 6-10, 2022. U.S. Dressage The following athletes/horse combinations will represent U.S. Dressage and are listed in alphabetical order: Anna Buffini (San Diego, Calif.) and FRH Davinia la Douce , her own 2007 Hanoverian mare Ashley Holzer (Wellington, Fla.) and Havanna 145 , a...
1 2 3 4 5 > >>