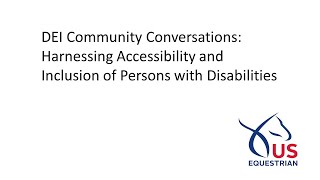 The second in US Equestrian's DEI Community Conversations series, "Harnessing Accessibility and Inclusion of Persons with Disabilities," took place via Zoom on April 14, 2021.

Hosted in partnership with RespectAbility, this conversation focuses on the lived experience of people with different disabilities in the equestrian industry and beyond, and it offers 10 tips for disability etiquette.

Captions and an American Sign Language (ASL) interpreter are provided for this DEI Community Conversation. A transcript of the presentation and text from the chat box are available below under Additional Information. 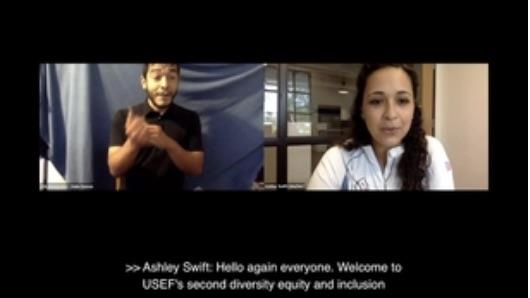 Alanna Flax-Clark, M.S.Ed. (Glen Gardner, N.J.) is a para-equestrian competing in dressage, as well as an actress, model, and writer. She was a member of the silver medal-winning Adequan® U.S. Para Dressage Team at the 2019 Caledon Spring Jubilee CPEDI3* and was named the 2019 Adequan/United States Dressage Federation Para Dressage Rider of the Year, among many other impressive performances.

Flax-Clark is a disability advocate, mentor to newly disabled members of the community, and aims to bring greater awareness to how sports and an active lifestyle can positively affect people with disabilities. She was diagnosed with a chronic neurological disease when she was younger and contracted a severe case of the influenza virus in her mid-20s that caused her immune system to attack her nerves, leaving her a quadriplegic. Flax-Clark decided to test out equine-assisted activities and therapies after becoming frustrated with her traditional rehab. She fell in love with horses and the sport of para dressage. Follow Flax-Clark on Facebook, Twitter, Instagram, and LinkedIn.

Ava Xiao-Lin Rigelhaupt is an avid equestrian and a writer, actress, and advocate for disability and autism representation in the entertainment industry. As an Entertainment Media Communications Fellow with RespectAbility, she consults on television shows and movies with studios like Disney and Netflix. Rigelhaupt started her disability advocacy as a founding member of a neurodiverse theatre company and as an inclusion intern at Trinity Repertory Company in Rhode Island. Rigelhaupt wants to write for TV or film and continue her love of acting by working with entertainment companies and professionals to create more opportunities for diverse people with disabilities in the entertainment industry. Connect with Rigelhaupt on LinkedIn.

Abigail Shaw is a long-distance runner and received a Bachelor of Science in Music Industry Studies from Appalachian State University and currently is pursuing a Master of Social Work from Fordham University. She works at Learning Ally, an educational solutions organization serving individuals with learning disabilities and those who are blind or low-vision. She is the College Success Program’s mentorship coordinator and the production coordinator of audiobooks at Learning Ally. Shaw is co-captain of the New York City chapter of Achilles International, an organization promoting mainstream athletics for people with disabilities. Whether by plane, train, automobile, or on foot, Shaw’s preferred method of transportation includes her yellow lab guide dog, Kit, by her side. Connect with Shaw on LinkedIn.

Rabbi Darby Leigh is a passionate snowboarder and the rabbi of Congregation Kerem Shalom in Concord, Mass. He is an advocate for the deaf community, committed to creating an inclusive, caring community with intellectual honesty and spiritual depth. Leigh is a published author, including a chapter in Deaf Identities: Exploring New Frontiers. He was a consultant for Hands On, an organization that provides sign language interpreting services for Broadway and off-Broadway productions, as well as for the Oscar-nominated documentary Sound and Fury. Leigh has also worked to create online videos with numerous other organizations where he has taught on issues related to deafness and disability access, earning many accolades along the way. He is married to Dr. Randi Leigh and they have three daughters. Follow Rabbi Leigh on Twitter.

Andrea Jennings is a former events planner and the founder of Shifting Creative Paradigms Entertainment and Productions, a production company dedicated to creating and producing inclusive and diverse content for television, film, theatre, and music productions. She is also guest lecturer at California State University, Los Angeles, and advocates for accessibility and disability rights through various advisory committees and as a commissioner. She trains individuals and industry professionals to “level the playing field” by teaching them creative solutions to influence social change in the arts, fashion, entertainment, and more. Jennings experienced a major car accident when she was working for a global advertising conglomerate. The accident left her with multiple life-changing injuries, which affected her ability to walk and work. After the accident, she realized her purpose was to create equitable solutions for social change and accessible events through her lived experience so that she could help others. 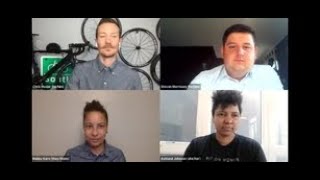 Introduction to LGBTQ+ and Becoming a Better Ally 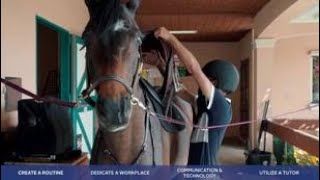 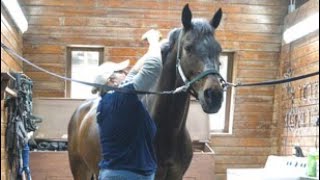 Preparing for an Event
Emma Ford
This Learning Center is provided solely as an informational and educational service to US Equestrian members. This Learning Center is not intended to nor does it constitute legal, medical, or veterinarian advice or opinions and should not be relied upon as such. By using this Learning Center, you agree to this disclaimer and recognize that it may be necessary to seek the advice of an attorney, medical physician, or equine veterinarian licensed to practice in the appropriate area.